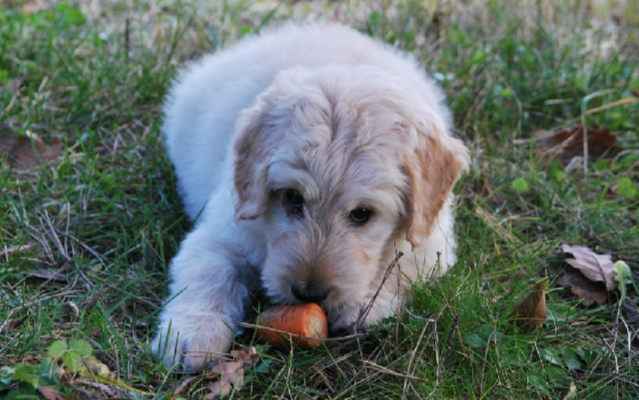 Hey there! Some links on this page are affiliate links which means that, if you choose to make a purchase, I may earn a small commission at no extra cost to you. I greatly appreciate your support!

Can Dogs Eat Human Food – Is it Healthier than Dog Food?

Hey there, my fellow dog owners!

Do you often wonder whether or not it’s a good idea to feed your dog some of your food?

There’s quite a debate it seems on what exactly is best for our dogs…some say never ever feed them people food and others say that certain human foods are actually good for a dog.

Well, here’s what I think…

I’ve always had dogs around from the time I was crawling around on the floor as a baby to now and I think it’s perfectly fine to give your dogs some human food. I say “some” since of course, it’s never a good idea to give them a huge amount at a time no matter what kind of food and plus, there are some foods that can make your dog sick…like chocolate.

Don’t give your dog chocolate…they could get sick, possibly fatally sick if they eat enough of it. Although I must admit, my dogs all have had a tiny bit of it…not from me though…my mom was always a sucker for those sad eyes our dogs would give her, and often would give them a tiny bit of her chocolate cake or even a piece of candy bar much to my dismay. But, nothing ever happened. They were fine….not that I’m saying go ahead and give them chocolate! Like I said, I don’t give them it and wouldn’t recommend it at all. But, you know mothers…they don’t listen, lol!

Our four dogs eat mainly dry kibble, but we also let them have a little bit of our food too. Why not? They absolutely love eating our food too, so I’ll usually give them things like cooked chicken (not the bones though), peanut butter, carrots, apple slices, broccoli, rice, cooked beef such as hamburger, baked potato, green beans, and cheese.

Let’s just say that greasy food doesn’t usually sit well in their stomachs…and we ended up with a mess later on. I think it was just too much for their stomachs to handle so they ended up with diarrhea both times. But, feeding them just a morsel or two of this seems to be fine. Just don’t go overboard or you’ll end up scrubbing floors in the middle of the night.

If you do decide to give your dog human food, just give them a little bit at first. Just a few bite size pieces and that’s it. If your dog has always been eating dry dog kibble remember it will take time for them to adjust to this new kind of food, so start out slow. And, also I must add…

Do not feed them as you’re eating at the table…you’ll end up with a dog that constantly bugs you to no end, begging and whining for a bit of your food every single time you eat. Give them some of your food after you’re done eating in their bowl or even before you eat…

Do not give in and start feeding them from the table…I know, it’s hard to resist those puppy dog eyes!

What Human Foods are Good for a Dog?

The foods that are great for dogs to eat include… yes, even veggies and fruits! Our dogs just love any kind of food they see us eating, even carrots! They go crazy for them, lol.

Human Foods Your Dog Can Eat Too

I’m not a veterinarian or dog diet specialist, but I’ve always given our dogs a bit of the “good” kinds of food. I probably should even give them more now that I realize it not only is safe, but it could even benefit my dogs by keeping certain health problems less likely. However, I’ll be adding more to their diet gradually.

Dogs do not do well with a sudden change in their diet. Even switching brands of dry dog food can make your dog sick, either vomiting, diarrhea, or becoming constipated. Another thing that can cause stomach upsets is not being consistent with their feeding time.

So, if you decide to change anything in your dog’s routine or daily eating habits do so gradually! It’ll save you a trip to your veterinarian with a sick dog…and, do ask your veterinarian what they would recommend also before changing your dog’s diet. Mine have always had a bit of human food, so for them it isn’t anything drastically new. Plus, we do still feed them dry kibble.

Recently, I’ve found out that it’s probably a good idea to include some people food in your dog’s diet…according to an article I read at Dogs Naturally Magazine, research has found that dogs that eat a variety of food that includes green leafy and yellow-orange vegetables are 70-90% less likely to have cancer!

Now, that is good news to me, since I’ve lost quite a few dogs already to cancer throughout the years. I never realized that feeding vegetables along with cooked meat and their own dry dog food could be a huge benefit to their health. No wonder the family dogs, Smokey and Stubby, that we had when I was growing up lived as long as they did…17 and 18 years old before they passed away of old age. My mom always gave them the leftovers from supper, which included cooked meat, veggies, and rice along with their dry dog food.

I also found this awesome video on YouTube, which shows you how to prepare chicken and a variety of vegetables for your dog. One thing that makes it super easy is no peeling and no worrying about spices either. You don’t need to do either since it is made for your dog.

Hope you enjoy the video! You can watch it below…

What do you think? Do you feed your dog human food?

Let me know in the comments below…I’d love to hear what you think!

Thanks for reading…hope you and your furry friend have an awesome day!