How Long Does It Take To Crate Train a Bull Dog Puppy? 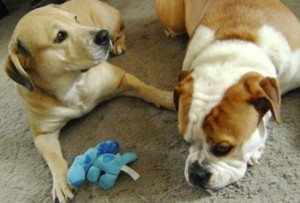 Does it really matter what breed it is?

Since every puppy has its own disposition or attitude it is impossible to honestly say exactly how long your bull dog puppy will take to be crate trained.

It also depends on how you train him or her.

One of my dogs is a purebred Old English Bulldog, and although I have to admit, he isn’t always the sharpest crayon in the box, he wasn’t too difficult to crate train.

As with any puppy, it takes some time and perseverance to properly train, no matter what breed. Some are a bit easier than others though.

Of all of the different breeds of dogs we’ve owned over the years, I have to say the heaviest or strongest chewer is guess who…

At least when he was a puppy, we sure found out how quickly they can chew something up! It takes him only a few minutes, at the most, to totally demolish something like shoes or a stuffed toy.

I do not mean just a little chewed up, I mean totally gone!

Only a few small pieces left behind and you couldn’t really tell what it had been before he sunk his teeth into it.

Hmmm… it kinda looks like it might‘ve been your shoe?

We knew there was no way we could chance leaving him unsupervised while we were gone somewhere.

We’d have nothing left!

Except maybe pieces of our couch and other furniture. I could just see the destruction already….

How about YOU? Does this sound familiar?

Are you worrying every time you leave the house? Dreading the mess you know will be waiting for you when you come home?

Crates…What Would We Ever Do Without Them?

One of the most important purchases, at least in my opinion, that you should make before even bringing your dog home is a good, safe crate. I know it has saved my house from being destroyed many times over the years!

Whether bringing a puppy or an older dog into your home, it is a good idea to have a crate handy for when you may need it. I definitely would make sure to have one ready before bringing a puppy home. An older dog may or may not need one. It all depends on how well the dog behaves especially when left alone.

How To Choose a Crate

Before purchasing a new dog crate, I’d recommend these steps to follow or think through:

One of the most important things to consider is what size crate you should get for your dog. You might think that you shouldn’t need a crate once the puppy gets a little older and has learned the house rules such as potty training and not chewing on everything in sight. Right?

Unfortunately that is not always a good idea and you end up buying another one because the first one you bought gets too small. I’ve learned from past experience that it is better to buy one that will be big enough for when they are full grown, just in case.

The crate that I’ve had for many years now has been very well worth the investment since it has been used for four different dogs and is still being used for our youngest dog. I’m not even sure what company made it anymore, since the logo wore off!

It is quite beat up now since one of our youngest furry family members, an Old English Bulldog mix, Jade used this crate.  Yes, her dad is the infamous chewer, Argon, that I mentioned earlier…he also used and abused this poor old crate.

For some reason, these two seem to be pretty rough on crates, in my opinion! But, it’s still hanging in there and we’re still using this crate when we need to go somewhere…so, it has been worth the money we spent on it.

I also have a smaller cage, which although is quite a few years old, it is a bit newer than the large one I have. This one is from a dog crate company called Midwest, so I’m thinking I’ll purchase another, but larger one, like the really old one I have.

After looking at reviews of many different crates I’ve found there’s a Midwest Life Stages crate which is quite highly recommended by those who have already purchased and used it for their dogs and puppies.

I think I’d rather buy a new crate to replace the old one I have than a new couch!

Need more info on crate training? You can read more on a couple of my other posts, Puppy Crate Training.. and Crate Training an Older Dog to learn more!

What kind of experiences have you had with your dog? Do you have any suggestions to add or anything you’d like to recommend trying?

Please leave me any questions or comments you have in the comment box below! I’d love to hear from you, my fellow dog lovers! 🙂 -Sherry

go back to Home Page