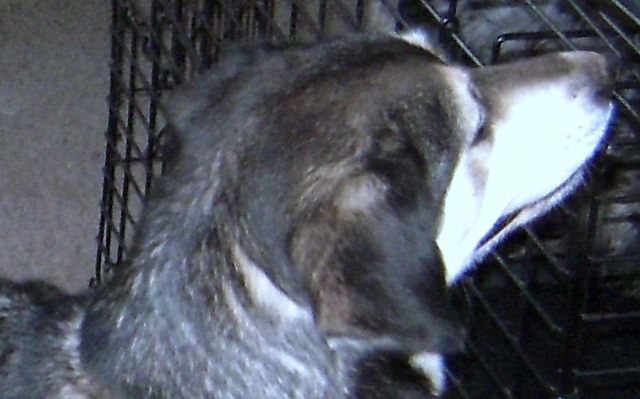 Hey there! Some links on this page are affiliate links which means that, if you choose to make a purchase, I may earn a small commission at no extra cost to you. I greatly appreciate your support!

Maybe you just adopted an older dog from the local animal shelter and don’t know if it’s possible to crate train it or not. You probably haven’t heard too much about crate training an older dog have you?

Well, first off I must say Good for You! Congratulations on your new family member! And…

It certainly is possible to train most older dogs to use a crate.

Or, just maybe you have an older dog that you’ve had since a puppy and…

Well, maybe you just didn’t think you’d NEED to crate train your dog for one reason or another when it was a pup and now you think it’s too late.

And, if it’s not chewing your house apart, why bother with it now, right?

what happens when your dog might have to stay overnight somewhere else?

without you and in an even more unfamiliar place…probably in a crate or kennel of some type.

Think about how your dog will be feeling. Wouldn’t you rather know it’ll be relaxed and comfortable in a crate no matter where it’s at? Well, maybe not as much as it would be at home with you, its best friend in the world, but at least it’d be used to it.

Okay, maybe your dog is acting perfect while you’re away at work and doesn’t do anything bad while you’re gone. It doesn’t touch a thing it’s not supposed to all day, so why bother crate training, it doesn’t need it anyways, right?

Well, no. Even if your dog behaves while it has the run of the house while you’re away, have you ever thought of how it would do if it does have to stay in a crate or kennel at some point?

If it’s not used to a crate at all and has never been crate trained,

what happens if your dog has to go to the vet overnight for surgery or observation?

Don’t you think your dog is going to freak out? It’s already having health problems, not feeling good, in pain, and now you’ve left it alone at the veterinarians…..

and of course, they’ll need to keep it in a crate or kennel there. They can’t just let it run all over the place. So, your dog is placed in a crate for a lot of the time it’s there.

If it’s not used to being in a crate it’s going to cause it more stress and anxiety. Not good!

There’s also some other reasons that would give you pause on whether or not you should go to the trouble of crate training.

What would you do if you go traveling or maybe your dog has developed some new behavior that you don’t like such as using your house as a potty or chewing on everything in the house while you’re gone? Some dogs do start having different behaviors as they get older.

Occasionally, dogs may even get a little cranky as they become older and can’t deal with certain visitors that may come to your house very well anymore either. Many dogs I’ve known experienced arthritis to some extent, which means they’re not in the best of moods all the time and start growling and barking at certain visitors that are just too overexcited about everything.

Some even bark at any and all visitors. For example, one of my Uncle’s dogs, a German shepherd, used to growl and bark at everyone, no matter if they sat as still as a stone. It was rather intimidating to have a 150 pound dog staring at me, growling….

I’m thinking older dogs with this condition are most likely just trying to warn them to stay away…they don’t want to get stepped on and hurt even more.

Training your older dog to go in its crate would give it peace of mind that they’re in a safe place where they won’t be accidentally stepped on by guests. This will not only make your dog feel safe, but your guests too. Most people don’t enjoy having a dog growling and barking at them. 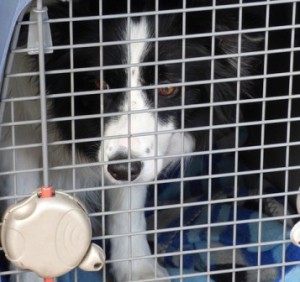 Crate training your older dog is much the same as training a puppy, but it usually will take a bit longer.

Your dog is used to life without a crate and has gotten used to a certain routine. Plus, an older dog’s memory is shorter, just like an older person, older dogs take longer to learn and remember what they’ve learned.

On the other hand, a puppy is a brand new, clean slate to work with and are able to remember things a little easier. It hasn’t gotten a routine set down yet on what a normal day should be, so you won’t have to “untrain” it from what it’s learned to do already like you would with an older dog.

It really depends on your dog and what experiences it has gone through in its life. Some may already have experienced being in a crate or kennel if you’ve adopted an older dog. So, it may have no problem with it. Other dogs may have had bad experiences in being in a crate, so it may be terrified of going into one. It’ll take more time and patience with these dogs for sure.

Let Your Old Dog Get Used to The Crate

Once you find the proper sized crate for your dog, let it get used to it. Set up your crate where you’d prefer it to be and leave the door open or even take the door off at first. This way your dog will be able to explore it on its own and get used to going in and out of it.

I’d recommend setting it up wherever there’s the most activity or the room where you and your family spend the most time. This way your dog is more likely to want to check it out and spend some time in there. Dogs love to be where YOU are and not by themselves.

The easiest way to get your dog to learn how to get in its crate is to use bribery. Throw a few of its favorite treats in the crate and leave the door so it stays open or take it off so it won’t scare the dog if it closes accidentally.

Another thing you can do to show your dog the crate is a good place is throw a favorite toy in there along with the treats. Don’t do anything other than placing the dog’s toys and treats in there.

Some dogs will go in there and grab their goodies right away, but many other dogs may be too afraid of it at first. You don’t need to force your dog in the crate. That’s the worst thing you can do. If your dog isn’t going in for the bribes just yet, give it some time. Just ignore what your dog is doing about it. It’ll find them when it wants and eventually it’ll get those treats out of there.

Can All Older Dogs Be Crate Trained?

Most older dogs can be crate trained, but every dog is different. There may be a few exceptions to the rule. Dogs that have been rescued or adopted from animal shelters may have a really hard time to ever accept being in a crate either from being in the shelter, stuck in a kennel or crate for hours at a time.

Or, sometimes dogs have issues from a previous crate experience that traumatized them severely…sometimes, so much that no matter how patient you are and no matter what you try, these poor dogs just won’t ever feel comfortable in a crate of any kind.

The only options I can see for these poor dogs is to try hiring a dog sitter, doggy daycare, or setting up a small room for it to stay in while you’re gone and see how it works. Of course, you can’t bring your dog’s “safe” room with you to the vet or along traveling. And, it may or may not cause some destruction to that room, but at least it’s limited to that ONE room and not the whole house!

Whether or not you choose to crate train your older dog is all up to you, but do please remember that there may come a day when you’ll wish you did. After all, dogs do need to stay at the vet’s overnight on occasion and the older they get the more likely that day is coming.

Now, I’m not trying to scare you, but speaking from experience, I’ve had to leave our dogs at the vet’s overnight for procedures such as spaying/neutering and even life-saving surgery on two of our older dogs in the past. If they didn’t get the surgery done to remove cancerous tumors, their lives would’ve been much shorter.

Sometimes things happen that you can’t foresee or ever expect. That’s life.  It’s better to be prepared for whatever little things you can to make life go a little smoother when it throws its worst at you…or your dog.

Anyways, wouldn’t you want to know your dog is comfortable while it’s in that crate or kennel at the vet, or maybe even while at a dog boarding kennel while you’re gone traveling to places you can’t take your dog?

Besides, a little crate training never hurt anyone…

Do you have an older dog that hasn’t been crate trained? Having problems with crate training your dog?

I’d love to know what you think! Let me know in the comment box below if you have anything you’d like to add or if have any questions.

I do hope this has helped you out some with your furry friend. Found this helpful or know someone it may help? Please share it with your friends.

Thanks for reading and best wishes 🙂 -Sherry